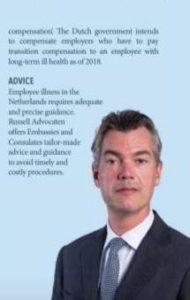 In the Summer / Fall 2017 issue of Diplomat Magazine an article by Jan Dop, LL.M., employment law specialist and Head of Embassy Desk at Russell Advocaten, has been published. You can read the article below or read the complete issue at https://issuu.com/diploflying/docs/dm.summer-fall.smll.b (p. 50-51).

Every Embassy and Consulate will at some point be confronted with ill employees. Since Dutch employment law regarding employee illness is quite complex, Russell Advocaten is often asked by Embassies and Consulates what to do in case of an ill employee. In general, Embassies and Consulates, as employers of local employees, are treated like any other employer in the Netherlands. In the following, Russell Advocaten will discuss frequently asked questions regarding employee illness in the Netherlands.

How to report employee illness?
Just as any other employer in the Netherlands, Embassies and Consulates have the duty to call in the assistance of an occupational safety and health service (in Dutch: Arbodienst). There are various Arbodienst-companies in the Netherlands. It is possible to enter into a long-term agreement with an Arbodienst, but you can also decide to only hire an Arbodienst for certain tasks.

What about the salary payment of an ill employee
Embassies and Consulates are obliged to pay at least 70% of the employee’s salary during the first two years of illness. However, during the first year of illness, the payment may not be lower than the statutory minimum wage. This rule does not apply to the second year. Irrespective of the employee’s salary, Embassies and Consulates do not have to pay more than 70% of the statutory daily maximum wage.

The obligation to pay the employee’s salary may be extended by one extra year in case the Institute for Execution of Employees’ Insurances (in Dutch: UWV WERKbedrijf) decides that the Embassy or Consulate did not put enough effort into the re-integration of the employee.

How to meet the re-integration obligation?
In order to avoid such an extension of the obligation to pay salary, it is very important to make an active effort to keep the employee’s absence due to illness as short as possible. The reintegration should initially aim at the employee’s return to his job. However, if that is not successful, he has to be offered suitable work with his own employer or a different employer will have to be found (this is the so-called second track reintegration).

It is important to make sure that an ill employee is being examined regularly by the Arbodienst (for instance every 4 – 6 weeks). Furthermore, during the first two years of illness there are several obligations for the employer to draw up reports regarding the illness of the employee and to report the employee illness to the UWV.

Is it possible to terminate the employment contract with an ill employee?
During the first two years of illness it is not allowed to dismiss an employee, except when the employee refuses to comply with the legal obligations in case of illness without good reasons (only in exceptional situations). After two years of illness, Embassies and Consulates are in principle allowed to terminate the employment contract of the employee, once the UWV has granted permission to do so. Please be aware that in case the UWV is of the opinion that the employer did not put enough effort in the reintegration of the employee and extends the obligation to pay wages during illness by one extra year, the prohibition to dismiss the employee will also be extended by one extra year.

An ill employee, whose employment contract is being terminated by the employer after two years of illness, is – just as in other dismissal cases – entitled to severance pay called ‘transition compensation’. The Dutch government intends to compensate employers who have to pay transition compensation to an employee with long-term ill health as of 2018.

More information
This article provides a brief insight into Dutch employment law and the potential consequences for your Embassy. But the Embassy desk of our firm also focuses on: